My method for rooting cuttings seems to be fairly successful, even with “difficult” plants, but my attempts to get seeds to grow is another story. V also, with his chilli obsession, tries to grow plants from seeds, but sadly, his success rate is even worse than mine.

We’ve even passed on some precious chilli seeds, including the naga, to my sister Angela’s gardener, who seems to be able to grow all kinds of things. 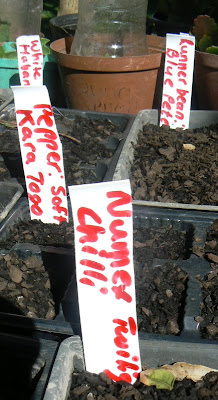 Nevertheless, V went a bit crazy ordering seeds from an online store called Living Seeds. He chose some unusual chillis, like white habanero and “NuMex Twilight”. I joined in the frenzy, and ordered old tomato varieties, including the heirloom brandywine cherry, as well as “Blue Peter” runner beans and “Caserta” marrow.

Angela came visiting in the midst of all of this, and she too got ordering. Strawberry popcorn and multi-coloured corn, among other things, went into the basket. We’ll swop seedlings later – assuming we get lucky enough to get to that stage.

A few days later, we take delivery of lots and lots of fascinating seeds. After we ooh and aah over the stash, we are faced with the obvious reality: now we have no choice but to get this seed business right. And what a serious business it seems to be.

This warmer spring weather suggests that it’s a good time to plant seeds. But I suspect that my soil medium choices for germinating seeds are not good ones, so I start by harassing the local nursery person: he calls himself the Plant Guy and he supplies seedlings to nurseries all over East London. I know he knows all about growing seeds.

He explains kindly that for getting seeds to germinate, it’s best to use a milled bark medium, and none of the stuff that I’ve been using (peat moss, potting soil, and so on). A few days later, I collect a mega bag of this medium from the nursery.

Living Seeds also gives good advice on seed germination: it told me, for example, that using seed trays can give you 90% better germination rates than direct sowing. There’s no shortage of trays in my potting area, which nestles in a mostly sheltered and shady spot behind the garden shed.

I’ll be careful with watering: gentle watering that doesn’t dislodge the seeds; not too much (the seeds will “damp off”, drown and rot, in other words) or too little (well, they will shrivel up and die).

Many hours later – how did I land up doing all of this on my own? – trays of seeds buried in the Plant Guy’s mix (at a depth not more than three times the size of the seeds) are neatly placed on the potting table. Their names are written in red permanent marker on labels made from strips of a cut-up ice-cream container.

It’s quite a beautiful sight, I think, full of promise. And I will keep you posted on any success, or lack of it.